From summer to winter, white continues to be the ultimate fashion color for shoes and there is no sign of slowing down.

Before getting into the details of this outfit, I’m going to be completely honest and tell you that I hated to wear white boots, so when I first saw those I thought they are too chic and not my style. Just as it happens with other styles that look strange at first, but later catch up to be trendy, so it happened to me with this one – the white boots are different and strange, but I liked them so much that I wanted to have them on my legs as soon as possible. And although I do like real leather shoes, thees were the best less-expensive non-leather alternative I could find and I was not about to invest in something super expensive just like that.

Of course afterwards came the question what to combine them with in an outfit – especially considering I was still a bit unsure how I felt about it. The outfit you see here is probably the 5th attempt at styling it, but it’s the one I liked the most when pieced together. The idea was to stay pretty simple with the rest of the outfit and let the boots do the talking, but of course without trying too hard. And I think the white poncho and boots combination looks really cool – by the way I like the black leggings a lot better than a pair of denim jeans.

So, I know this style is maybe not be a typical casual, streetstyle outfit, but I’m sure some of you might also like it as a white solution for the white winter. And if you’ve also been trying to style white boots as well, then take the challenge and try something similar on and see what you think! Let me know! 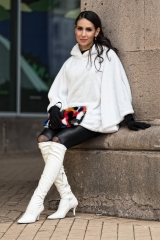 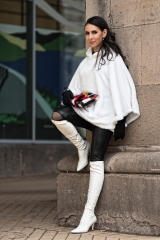 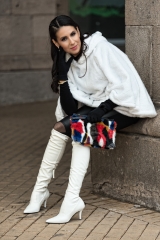 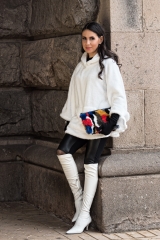 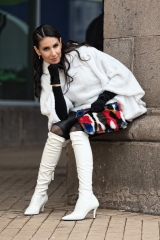 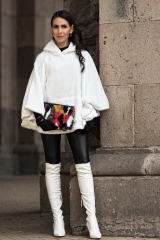